Propaganda and other Poppycock – Part 2 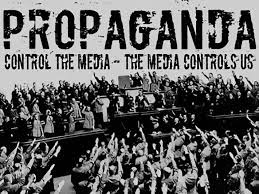 It’s everywhere and anywhere.  Call it viral or looped but such information is idiomatic in this age of incessant information; the continuous distribution of bad, erroneous and deceptive words, orated or published.

George Orwell foretold of such times:  “But if thought corrupts language, language can also corrupt thought.”  Yes, feed them crap and sooner or later they’ll like it, eat it and say, “Umm, that’s good!”

In his works, Media Control: The Spectacular Achievements of Propaganda, Noam Chomsky explains:

Propaganda is to a democracy what the bludgeon is to a totalitarian state.

Who controls the present, controls the past and future too, Orwell described in 1984.   Control is really about fear; the fear that without controls, life would bel less, much less, if as you accept that such crimes as terrorism and hate (crimes) depend on who is supposedly doing it and not, objectively, what is being done, the supposed act(s).