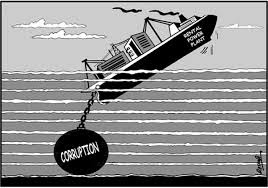 Lord Acton was attributed with the commonly recognized phrase,

Corruption, the effect, is illustrated in that cartoon, acting as an anchor beyond the buoyancy or ship's capacity to stay afloat.  It may work for awhile, corruption, but eventually brings the house down, a Titanic tragedy that takes the innocent with the guilty.

On a personal level, Robert Bly writes in Iron John:

There’s a general assumption now that every man in a position of power is or will soon be corrupt and oppressive. Yet the Greeks understood and praised a positive male energy that has accepted authority.

Authority and Power are not always the same. The first uses power judiciously and generally has some Skin in the Game and thus, sees the use of a power as a reflection on them, the outcome; whereas the second is much more inclined to abuse, assessing no costs are skin-lost the consequences of abuse, corruption.
Posted by H. Kirk Rainer at 12:27 PM