Power - the dragon's breath of fire 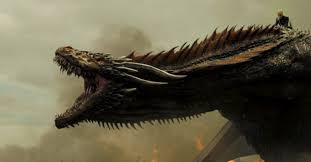 Even children know something of dragons, the supposed fictional beast of the somewhat medieval age that generally wreak terror and render turmoil on a village and countryside, leaving a swath of death and destruction in its wake.  The dragon is indomitable, with practically no predators and what's more can fly and blow fire.


Let's face it, the dragon is/was a reptile without rival--unless you believe in  dragon slayers.

There is the actual dragon and the figurative one; the one with features partly shown above and the symbolism as something of beat, boundless and brimming with power, predominate and prodigious.

And whether you take such advise or believe in dragons at all, the truth is that as a symbol, dragons depict some....  They may not have scales, horns or wings, but they fume smoke and foment discord, discontent, disparity, deception, destruction and even death.

Yes, dragons do/still exist. They may be cleverly disguised, hidden under some title or indeterminable among the crowd, but still, they live.  C.S. Lewis wrote in The Voyage of the Dawn Treader,


Sleeping on a dragon's hoard with greedy, dragon's thoughts in his heart, he had become a dragon himself. .

Yes, another fantasy or fiction, Voyage of the Dawn Treader, but does one become what he thinks, desires and dwells?


A dragon is born a dragon but is a person becomes like/as one when their belief and behavior is so.  Yes, they figuratively or literally fly about, committing terror, reigning their deep and dark, high and low, far and wide.

But then again, more fairy tales, fiction and fantasy, that remind or reassure the child within us that with dragons come slayers, those with enough courage to at least confront the beast if not capture or conquer it--so says G. K Chesterton in Tremendous Trifles.

What fairly tales give the child (like) is his first clear idea of the possible defeat.... The [child knows of] the dragon...but the fairy tale provides [a courageous sort].