Deception - Fooling thyself...and your own 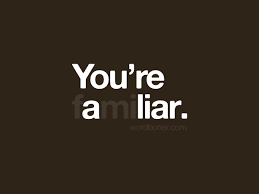 Again, deception is more often about fooling ourselves; lying to ourselves about ourselves to please, for pity our pride, ourselves if not others too.  Our lives are reflected through smoke and mirrors so that what appears is, or is perceived, is not real, reality.

One may think, say or act (as though they are entitled, have the right or otherwise are deserving) to play such games, first fooling self and then attempting to fool those about them, including family or their own.

You're a liar to your family, familiar with lying and liking it!

Not that such deceit in nothing new under the sun; as with the ages, so too is deception one to one, one on one and one to others--even their own.

In the Garden of Eden, Eve was deceived by Satan.  Among the earliest lineage of Jesus, Jacob deceived his brother Esau (and indeed, Jacob was much the deceiver).  Passing over many other accounts and occurrences, with often ugly outcomes, Judas Iscariot attempted to deceive Jesus only to realize some measure of the cost of betrayal.

Yes, the world is replete with deceit and in these last days, such is on the rise thanks in part to the dissemination/distribution of information whether vetted or not, qualified as the truth or facts purported.

In the later days, persons will deceive and be deceived, going so far as to reward those who do such things well.  One will turn against the other (to suggest marriage and family)

Who would do such a thing; who would lie to others so close--too close--without any apparent care of the costs let alone the feelings of the other, the relationship of the two?   Is/are such persons mentally ill, diagnosed or not with some disorder, or are they simply wicked, wrought with spiritual darkness?
Posted by H. Kirk Rainer at 1:39 PM