Deception - pawns on the chessboard 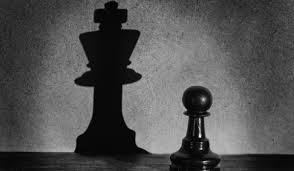 Most of familiar with the game of chess; the king, that though limited in movement, is crucial to the outcome ("check", "checkmate" or when defeat is inevitable, concession).  Then there is the pawn, the many pawns as the first line of defense and, on rare occasion, a hero of sort.

For the most part, the pawns are "consumed" however, taken out by the more powerful:  the queen and her court of bishops, knights and rooks.  It is not random or remote that the pawn is physically a small piece and, though larger in number, is much limited in movement, often serving as "cannon fodder"; sacrificed for the sake of the kingdom, the potential to preserve power through victory.For some play(-ers), the pawn may actually seem to get in the way, more a liability than asset, simply filling a block on the board, blocking the better.  Pawns are at best expendable, sometimes considered a indefensible as a wall in modern days of warfare.


If you were a chess piece, which one would you prefer to be?  You can choose a pawn, the poorest of all pieces or something else, grand and great though fewer in number.

It seems that the pawn is, per the number, "only a number" and nothing more.  The play momentarily accepts the loss of a pawn and quite incidental, ignominious in the casualties of the conflict, competition.

At one time or/and another, the pawn will be your part; you will be drawn in to the game (racket) only to realize (perhaps after much time and thought), that you were taken...sometimes still believing that you did, "the right thing."  You may beat yourself up over this, accepting or acknowledging that you were a fool, too taken for your own good or benefit; yet life and living will never fully release you from "playing the pawn" as long as you love, really love.  For what is love without sacrifices and what is sacrifice without trust that, if not for them (whomever "them" happens to be) that you did it (whatever the gift or sacrifice was) for "us" as it was.
Posted by H. Kirk Rainer at 7:29 AM