Who was Carle C. Zimmerman? 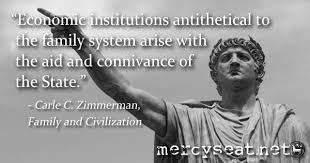 Of academia, Carle was an American sociologist and author of Family and Civilization.  Some years ago, I read this book, over and over with highlights and annotations. His sense of the family's future in western culture was (and is) profound.

The family is an institution crucial to a free society.  Intact families are the foundation of a free society, small governments that serve to strengthen society--staving off state power aimed to replace it.

Where fatherhood goes, so goes the family and where the family goes so goes societal strength, community and cultures—self-government.

From the Web-based Goodreads, the following comment on his book:


The man wrote in the late 1940's and he was clearly prophetic. He was off in his prediction of the collapse of the West (he thought end of 20th century) but his analysis that the West cannot rejuvenate itself until and unless the family unit is delivered from its current hyper-atomism was spot-on. Indeed, I'm so convinced by Zimmerman's argument that I am inclined to think the best thing we could do would be to hasten the collapse by supporting the Feminism, GLBT agenda.

I have used his inspiration and insights in my own writing, his unique and unadulterated analysis of the history of society and, specific to us, projection of society in the West.
He writes in the 1940’s,


Marriage did not collapse under its own weight; it was ruthlessly dismantled piece by piece…to advance human freedom.

Marriage and family undone—“ruthlessly dismantled”!  But why; why is marriage and family a target, perhaps a threat, to our culture, civilization?  What did marriage ever do but offer men at their possible best, both husbands and fathers?

To address these questions, I turn to Albert Jay Nock, a minister and author of Our Enemy the State.
Posted by H. Kirk Rainer at 2:08 PM No comments:

From page 27 of The Portable Voltaire:

This one particular religion was Voltaire’s target because it was the one in power in the  Europe of his day. Had another religion been dominate he would have despised and attacked it…Of course he did not condemn Christianity—because he believed that the laws of right and wrong are known to mankind, including Christians; a belief that he summed-up in the statement:

He believed in the existence of God—a prime mover—for the homely reason that he found it impossible for there to be a watch without a watchmaker.

He did not see the great watch of the universe running marvelously if not beneficially regarding mankind.

Voltaire observed the human conditions (as with King Solomon) as woeful, the lot of much of mankind, suffering and sacrifice.  Meanwhile, the church of Day (Anglican or Catholic) was in Voltaire’s view corrupt—the consequence of power...alliances with the state.

Christ’s church is described as a radiant bride, pure and perfect, as opposed to other institutions of acclaimed churches steeped in all manner of sin, carnality and corruption. To separate the two is sometimes described Biblically as the wheat and tares, sheep and goats, the house built on rock versus that built on sand, and others…

When/as the church is purified so too is God glorified, the son’s return and the earth restored, a New Jerusalem.   Until that great and glorious time, the church must hold-fast in holiness, in the world but not of the world.

Voltaire observed the adulterous condition of the church and exposed it as perhaps one of some, likely leading to some form of condemnation—the consequence of any and all who challenge power, the state and its suckling.

Christ’s condemnation (crucifixion) was a conspiracy of both the established church leadership (Sadducee) and the state (Governor Pilate and Herod); and indeed, these two remain alive and armed to exact more hardship and hegemony on any and all who attempt to hold them accountable or otherwise threaten their ways, their power.
Posted by H. Kirk Rainer at 5:39 PM No comments: 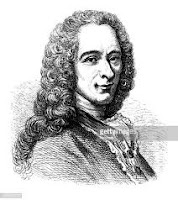 Back in the saddle again, my attention is on the age old philosopher Voltaire.

Who was Voltaire and why do I turn to him now? Because he was smart, wise and a visionary;
one that understood things about life and living and perhaps on scale of King Solomon.

First, and as a precondition, even caveat, he was critical of the church, organized religion, as with this remark,


There may be some good in religion, but an intelligent man does not need it as a support to morality; too often, in history, it has been used by priests to bemuse the public mind while kings picked the public pocket.


On the downside, he may have been too sharp, quick to judge but on the upside, may
have witnessed corruption in the church not the least of which was (and is) its fidelity to
(or infidelity with) the state.

Why I like some of his ideas, opinions and observations, is primarily because of his
described and expressed wittiness—and that is it! I do not like or appreciate his lofty
and lusty aspects because it seems his choice, claimed as counter to religion, is in fact
his own religion—what he believes…. For the rest, much of this man’s works, I arrive
with a blank slate, purposely ready and possibly able to understand something(s) of this
great figure of his time and since.
Posted by H. Kirk Rainer at 9:36 PM No comments: 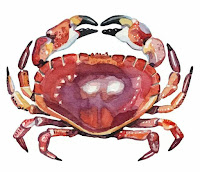 My discipline in writing is in need of some refinement, for not only have I neglected this blog but also the editing of my latest book, a play, entitled:  “Courage in the Crush”.

What is “the crush” and why is courage the call?  We live in a world that is getting crazier by the day and with all the technology that, whether meant for good, is (or can be) applied for bad, intentional or not, the consequences can or could be as no other in history, hence “the Crush”.

This book is written as a play with some 6-7 speaking or active characters; 4 supposed good creatures or crustaceans and 3 supernatural, evil creatures representing and controlling many fallen angels and even more physical creatures of the natural world, the great collective of the many.

This play is about a small band of crabs struggling to survive in a sea of ever growing danger and despair; where love (called “care”) is dying. A world without love is near death, a time beyond any return to the beauty and bounty the spawns from care, caring.

Unparalleled hatred among and within these creatures, high and low, followed with apathy and indifference, all lending to the Crush. Meanwhile, the many merely follow without question as fish in a barrel, herds or hoards blindly following spirits to hell.

Where does the take us (or them) but to the precipice of life and living, on the cusp of the dark and deep, the darkness of space and deepest beneath the bottom of the world.  From sea to sea, shore to shore, bottom to top, the world is fast approaching crush pressures and who but a band of crabs confess of what is happening from the past backward to the future forward, traveling through time and place shadowed by the spirits.
Posted by H. Kirk Rainer at 2:31 PM No comments: