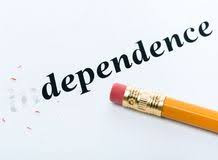 In the welfare state are many circumstances for (and of) dependence.  We each and all truly have needs, something or somebody for our individual:
In collectivism is an idea purported as "equal rights" or equality; that is, that a "minority" desires and determines to be equal, one class to another.  In fact, such an idea is not realistic or reasonable (as no two persons can be equal in a earthly way--let alone classes or collectives).

Indeed, collectivism co-ops individual rights or individualism, replacing with rights for groups while correspondingly, creating greater dependence on the state for such rights, privileges.

As a cautionary tale, the words of Voltaire:

It is not inequality which is the real misfortune--it is dependence!

To wonder why dependence is "the real misfortune" is to consider some context of welfare. Yes, welfare helps folks but because it is from the state it is truly not a gift or similar, but always has strings attached that finally amount to seizing of power--individual folk's power!
What is more, welfare is not factually from the state--as the state does not make money--but is a re-distribution quite often as an seemingly endless borrowing, an untenable debt burden on the commons. T

The state poses as a goodwill agent when in actuality is using-abusing the public interest, the future of or nation, to seize and leverage power, buying votes as LBJ did with The Great Society.


In general, the art of government consists in taking as much money as possible from one party of the citizens to give to another.

With debt however, the "taking" is against future generations--a burden too big to bear.

Inequality is inevitable, a natural condition.
Dependence however is the determination of every despot.