Who was Albert Jay Nock? 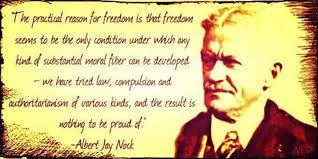 Mentioned in the previous article, Nock authored Our Enemy the State. Here is the first of several excerpts:


I wonder how many such men in America would know that Communism, the New Deal, Fascism, Nazism, are merely so-many trade-names for collectivist Statism, like the trade-names for tooth-pastes which are all exactly alike except for the flavoring.

Yes, any “-ism” gravitates toward Statism; and thus, as our media makes some –isms taboo while others less so or even acceptable, adopted, what is really going on?  Simply put, a horse by any color is still a horse and an-ism by any prefix is still, finally Statism.

From another of his works, Memoirs of a Superfluous Man:


Another strange notion pervading whole peoples is that the State has money of its own; and nowhere is this absurdity more firmly fixed than in America. The State has no money. It produces nothing. It existence is purely parasitic, maintained by taxation; that is to say, by forced levies on the production of others. “Government money,” of which one hears so much nowadays, does not exist; there is no such thing.

Explain how Washington DC today has the highest per Capita income in the U.S.?  How does a city (or district) do so well—better than all—and produce nothing?

Corruption is how…, but as though one cares, what can be done about it?   Is corruption reversible, treatable—as with a disease or virus—or is the State too far gone, crossing the line long ago, and now on an irreversible trajectory of deeper and wider crime?
All the power [the State] has is what society gives it, plus what it confiscates from time to time on one pretext or another; there is no other source from which State power can be drawn. Therefore every assumption of State power, whether by gift or seizure, leaves society with so much less power.

Consider the family as an institution; is or can the State be complicit in the decline of this institution, the foundation of a free society?

Indeed is has and does—systematically undermining the family through so-called “Family Court” and other designations of civil court/law that operates in the State’s interest and the expense of family, society and freedom.

Woe to the State, the biggest criminal of them all.
Posted by H. Kirk Rainer at 7:42 PM