Global warming is a scam, but environmental cyclical changes are not

The matter of the deep and dark Winter is on the move; that is, the sun is presently displaying more sunspots and thus, is discharging less UV, light and heat.  This solar cycle occurs every hundred years, every other century or two hundred years, lapsing into 30-40 year period of below-average temperatures.

What, the earth is getting colder?

Yes, as it does historically every 100 years, the nature of the sun relative to the earth.

Maybe not that severe, though historical accounts indicate that the cold has (and will) impact food production—the consequences of food scarcity and starvation on some scale.
Whereas such occurred per records and research (see John L. Casey, author of Cold Sun and Dark Winter), who is featured in relevant interviews-videos on You-tube. 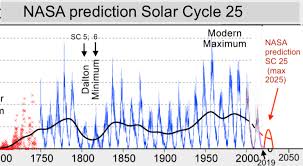 What is happening is neither unusual or unpredictable; indeed, this event, called a “grand solar minimum”, is already underway even as it occurred some 200 years ago, the early 1800's and apparently prior....

John L. Casey is but one in a series of scientist who discovered, researched and reported.

Sadly, this scientific research has been superseded by the political agenda of global warming.  Can you believe that something of such seriousness, intensifying around 2030, is effectively denied in effect?

Suppose that the grand solar minimum is real and that, present or not, is serious.   Why would governments embrace global warming while, systematic or not, reject this cyclical solar minimum?

If governments see this cycle, a natural occurrence, as a real threat, why would they inform the general public(s)?  Governments always act in their interest and, scarcity or not, with the necessary force to protect and protract their power.  Withholding information of this sort is a serious matter thought it is intentional, enabling a relative few to prepare while the vast majority, unaware or ill-informed, are not.

What will become of “the vast majority”?

I don’t know…but I do believe that the further the land mass from the equator, the greater the effect of the grand solar minimum; hence, the impact that population of the vast majority will be the greatest—both the extremes and duration of cold weather.

Furthermore, as also mapped to this cyclical nature, is a rise in seismic activity; namely, earthquakes, tsunamis and the like.