Have you ever been hated?

Have you…ever been hated by another? 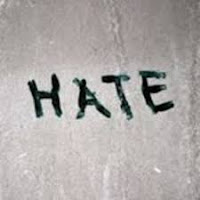 Have you hated another for whatever reason(s) or cause(s)?

Do you remember in the one of the Star Wars series (maybe, “The Empire Strikes Back”), when Darth Vader says to Luke, “I feel your hate”—and seemingly reveling in at least the moment if not the outcome, presuming that Luke has been beaten (down).

As to why Vader hates, well, it may have been his tragic disfiguring, lost love or anything combination that shape and influence one's life. Someone has to be Darth-like.

God hates, of course, as described in Proverbs 6:
Haughty eyes (or pride in the worse sense)
A lying tongue (or repeated, habitual lying)
Hands that shed innocent blood (or murder)
Hearts that devise wicked schemes
Feet that are quick to rush into evil
A false witness who pours out lies
And God detests a person who stirs up conflict in the community

It’s okay to hate or to be hated when it is justified or righteous, but when hate is not..., then it is not okay and worse, it is wrong.

To hate another out of jealousy/envy or even pity, is wrong. Worse even more is to act on that hate, a malicious action or behavior.

Still, hate can also hurt the hater; it can consume them and in turn, ruin their lives, any chance of happiness let alone satisfaction.

If/as you have ever been hated, to suggest you know that you are hated, you might think, what did I do to cause this or simply, why do they hate me?  “They" may have good reason or cause, but then they may not and it is when the hate is not justified or righteous that its on the hater and not the hated to reconcile or rectify what is at the root of the hatred.

A great quote from James Baldwin in The Fire Next Time,

Imagine one of the reasons that people cling to their hates so stubbornly is because they sense, once hate is gone, they will be forced to deal with pain.

And then one more from Will Smith, a cautionary tale about living to/with hate;

Throughout life people will make you mad, disrespect you and treat you bad. Let God deal with the things they do, cause hate in your heart will consume you. Indeed, there are things hate—and for good reason—but folks will do well to let hate go one way or the other.

For if you don’t let that hate go what other reason is there to live or to let live?