A Return to THEY LIVE 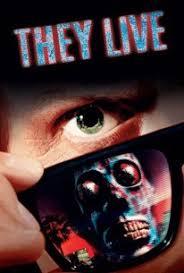 Once again, the film, THEY LIVE, as the backdrop for this latest theme and subject of masking for medical or other reasons.

As you may recall, the film is dystopian; depicting Las Angeles during such times with lots of folks in tent cities, struggling to survive, while beneath the human appearance, a relatively few humanoids rule the day.

What remains for one relative newcomer, a main character, is to discover sunglasses that do more than shade; quit the contrary, these lens actually enlighten the wearer as to the truth of what is taking place and still more, the real faces and facades of these humanoids that run things, apparently relegating the public to some form of servility, struggle, amid many illusions, perceptions and propaganda.

Folks are forced into a system to:

In the postings to follow, THEY LIVE is the backdrop for examining the current practice and policy of mask-wearing.
Posted by H. Kirk Rainer at 7:58 AM