A Virus, Vile Maxim of the Masters of Mankind


Who benefits from all the money that being splashed around; who will pay for it and more importantly, who owns the companies that do the printing and produce money out of thin air?

Will we be put under increased surveillance to justify tracking the virus?

'What' and 'Who' are very important question words, but more importantly, what the answers?

Somehow I don't think we will ever be party to the truth of the situation.


The phrase, "The Vile Maxim of the Masters of Mankind", comes from The Wealth of Nations, Adam Smith. 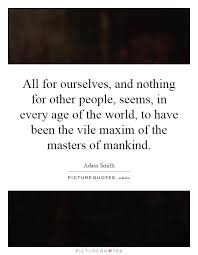 'All for ourselves and nothing for other people' seems, in every age of the world, to have been the vile maxim of the masters of mankind.

Reportedly, the shifting of wealth has been underway since the 1970's; that with each passing decade, an increase in the gap rises--giving rise to all the adverse consequences, social, economic and otherwise.

Where are we going, the gap?

A similar, extreme of inequality occurred in the 1920's leading-up to The Great Depression, and while not the singular cause, still, had (and has) some adverse effect on the standard of living and prospect for growth, access to capital.

The vile maxim meanwhile is somewhat a silent partner; not nameless but nefarious, nebulous as to its relations with/of the state and corporations--never mind the commons, "other people".