THEY LIVE - Be Enlightened 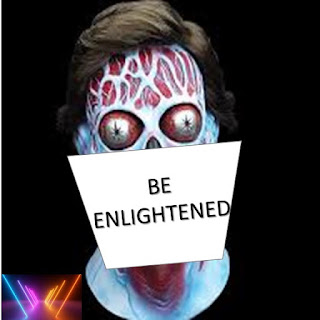 Another theme (more order) that combines the title of that ‘90's dystopian film, THEY LIVE, and the present pandemonium presented by the suggested masking—as a preventive measure, of course, for the virus.

I believe that the mask (outfitting) is not really about prevention as much as it is about conditioning; that is, and once more, using fear to force to coerce or compel folks to do something on the pretense that it is for the common good, health, safety and such.

The dangers of exploiting science are legion.  When the state or politic uses science at their discretion—or when it serves their interests of/for power—then they are functioning by expedience; that is, where the end justifies the means rather than a scientific approach of hypotheses testing via analysis, calculation.

Policy or procedure is fine as long as it supports the state's interest; otherwise, it is discretely, decidedly dismissed or disregarded in view of the larger canvass of corruption.

One may say, “I am enlightened,” or more “I know the truth”, only to later discover their misunderstanding, doubting their earlier conclusions or altogether dismissing what turns about to rubbish, rhetoric or a ruse.

Let us face the fact(s) that some institutions simply don’t consider the facts, or least not all, but purposely choose what best serves their interest; and again, it is expedience.

A prosecutor will judiciously draw the evidence from the process of Discovery that best serves the end—which is usually to punish—while downgrading or altogether dismissing that which does not.   And to them, such practice is merely the formation of their case albeit dealing from a deck that is not by any means a fair hand--or justice.

To be enlightened is in part the result of experience; one must observe criminal courts in action to really appreciate that described above as expedience—as opposed to due process.  Without any experience, relying entirely on what the media present or other means propose, one may mistakenly think that criminal court practices due process and that the 5th Amendment is honored, applied, but they would be wrong.

Be careful on where you draw your so-called light from, the source and their intentions, motives!  For what you may presume or presuppose as light—and thus to be enlightened—is nothing of the sort, but only the appearance (pronouncement, proclamation, perception, and persona) and thus darkness in the making, the masking.