I know that I sometimes CONFORM, call it consciousness, conscience, or just plain-ole insecurity about being different, odd, or weird.   Maybe most of us are this way, dyed-in-the-wool conformists—most comfortable and comforted when conforming to what appears as normal, acceptable, and even respectable.

Here, in the backdrop of the film THEY LIVE is the word and action, "CONFORM"; as to be controlled as though a programmed robot--and not a human capable of critical thinking, a moral base and all other aspects of thinking and doing endowed to man. 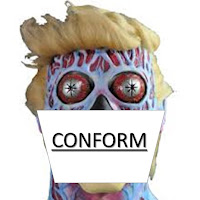 To be yourself in a world that is constantly trying to make you something else is the greatest accomplishment.

Adding much more on this, CONFORM, is Doris Lessing, where she writes in The Golden Book:

Ideally, what should be said to every child, repeatedly, throughout his or her school life is something like this: You are in the process of being indoctrinated. We have not yet evolved a system of education that is not a system of indoctrination.

A favorite film and book of which is Into the Wild; here, the author, Jack Krakauer writes:

…The very basic core of a man's living spirit is his passion for adventure. The joy of life comes from our encounters with new experiences, and hence there is no greater joy than to have an endlessly changing horizon, for each day to have a new and different sun.

The central character of Into the Wild was, while dangerous, was courageous too; a young person who turned his back on convention and all the lure of a upper-middle class lifestyle, to follow what some may think a reckless and rebellious choice while others, an adventure aimed to find a final frontier and see life in the most extreme of needs, the least of resources.

Another from the highly existentialist, Henry David Thoreau, Walden:

Any fool can make a rule [and] any fool will mind it.

And then another from Howard Zinn, You Can't Be Neutral on a Moving Train: A Personal History of Our Times,

But human beings are not machines, and however powerful the pressure to conform, they sometimes are so moved by what they see as injustice that they dare to declare their independence. In that historical possibility lies hope.

Finally, I leave you with the last of a litany of quotes, this final by Rollo Mays:

The opposite of courage in our society is not cowardice, it's conformity.