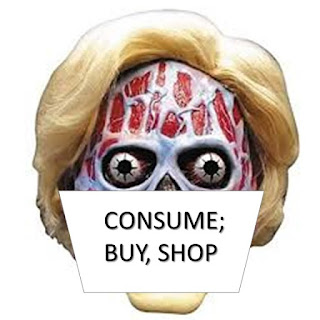 This next in a series that combine “the mask” and the film, THEY LIVE, is about one or two of the “’ism’s” not taboo or forbidden in our society, culture.  (Referring to Ralph Nader's description of the tabooed "ism's" of the McCarthy era).


Materialism/consumerism is on a scale like that of no other single sovereign and, in all assessment, is one possibility of the true form of American government that we serve—though inclined to believe that it serves us, present and future.

With materialism/consumerism is also  secularism; emphasized as essentially the ethos of our economy (not a system based on production as much as consumption, debt much more than saving and an endless and unlimited indulgence that finally produces nothing but dissatisfaction, disillusionment and even distrust among/between persons, parties and classes).

As the Romans are acclaimed to have given their countrymen bread & circus, so too does our society; first, as 5% of the world’s population consuming around 25% of output (bread), but also as a people saturated in entertainment (circus)—the consequences of which is the power of prosperity however illusive and ill-gained it is, has become, however distracting and deceiving “the show”, theater, with a bag full of goodies.

"CONSUME" is a softer side of tyranny; a side angled as to appear as though it is altogether good and right in keeping with a quest for The American Dream.  Our lives are saturated with this theme, and insatiable appetite driven far above and beyond our needs.

Who can argue that prosperity is not the point, after all?    More toys, preoccupations and attractions that invariably leave the astute or aware if much the same dilemma as that of King Solomon:  "all is vanity--a chasing after the wind".

As an alternative to naked or brute force, CONSUME is clever in doing deceptively the dirty work of a despot; and for any who yet to achieve or to reclaim The American Dream, don't worry, because we're draining the swamp and are going to bring America back.

All over the place, from the popular culture to the propaganda system, there is constant pressure to make people feel that they are helpless, that the only role they can have is to ratify decisions and to consume.

To some degree, and to their credit, young folks of the '60s attempted to push-back on what Francis Schaeffer called “the plastic culture” (consumption, consumerism, etc.), “dominated by materialism.”  He writes:

...the hippies of the '60s did understand something. They were right in fighting the plastic culture, and the church should have been fighting it too... More than this, they were right in the fact that the plastic culture - modern man, the mechanistic worldview in university textbooks and in practice, the total threat of the machine, the establishment technology, the bourgeois upper middle class - is poor in its sensitivity to nature..

Sadly, much of our society wears the mask of/to CONSUME, Christians and non-Christians alike, practicing a religion that is replete with Relativism and finally vanity--a chasing after the wind.