THEY LIVE – NO INDEPENDENT THOUGHT 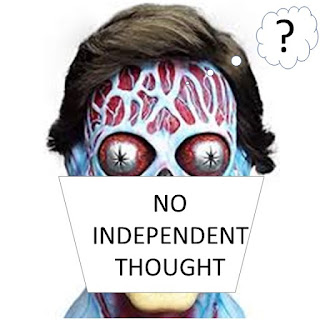 To explain INDEPENDENT THOUGHT is to consider several phrases similar, such a Leo Tolstoy,

Freethinkers are those who are willing to use their minds without prejudice and without fearing to understand things that clash with their own customs, privileges, or beliefs. This state of mind is not common, but it is essential for right thinking...

People have only as much liberty as they have the intelligence to want and the courage to take.

Never mind notions of one’s personal “right”, but more, much more, INDEPENDENT THOUGHT is our responsibility to toward ourselves and then to others regardless of what the authorities say, do or force upon you—which is why it takes courage and a desire for truth and with that, hope.

In a hopeless environment, INDEPENDENT THOUGHT is criminalized, crushed, and condemned, with any possibility for truth long muted in a mainstream of information and data manufactured for public approval, propaganda.

In the film THEY LIVE, discovery of truth is possible only with the special sunglasses, (never mind the possibility of hope).  As presented, the plot is to ensure that the remaining human class is not only denied truth but is further, deceived by these bodies, any awareness of the humanoids conspiring and collaborating to control them and perhaps replace them altogether.

A lengthy but timely interview on truth, independent thought, words and action,

With the loss of INDEPENDENT THOUGHT so too truth without courage, as Orwell warned,


In a Time of Universal Deceit — Telling the Truth Is a Revolutionary Act.