When I see the word, OBEY, what do I think?  On the one hand is something respectable, respectful, but on the other is an order or command without exception, exclusion, aimed to move us well beyond what is normal and indeed to madness, among and between us.

“To obey is better than sacrifice”, so says Bible scripture, to infer that obedience to God is foremost, an outpouring of the faith, trusting that God’s order or command is righteous, without flaw , falsehoods and failure. 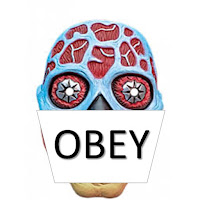 As to orders or commands imposed to/on me by others, and especially institutions, is to sometimes raise a flag; not always, and often I am sure that I attempt to honor or respect such dictates whether out of devotion to or dread of authorities, right, wrong, indifferent, with or without deference; but sometimes, and increasingly, I am cautious of unilateral orders and unjustified commands—and especially the kind that are not reasonable or simply said,

“This makes no sense.”

An example of a nonsensical order or command is the present “shelter-in-place”, presumably aimed to flatten the curve or otherwise reduce the spread of this virus.

But then, the confusion and chaos that seems almost if not created, manufactured to mislead and misdirect the general public; and more, is the motive or intention behind the orders or commands--the difference between what is said or suggested and what is actually occurring--behind the scenes, the show.

In no other time of national history have the healthy been "sheltered" or quarantined as a prevention for a viral spread.

Presently reading a biography on Hitler, I seem quickly put-out or put-off by the politics of this man, his mind, manner, methods. Hitler was obsessed by (and in) politics more than anything or anyone, deeply moved by the power to move others to a place that, unless driven by fear, would not likely go, even imagine.  The author, Alan Bullock. writes in Germany’s days entering economic depression, hyper- inflation (1928):

He continues in the next paragraph:

It was already clear that an economic crisis would produce a political crisis. In such circumstances, men are no longer amendable to arguments of reason.

To obey is better than sacrifice given the motives and intentions of authority are just and right, true & true, but when motives are unjust and wrongful, then to obey is without reason unless an economic crisis within which reason does not matter and fear is all there is.

Hitler’s movement was doubly steeped in fear; first that once great nation and Arian race were subordinated and subjected to other states, and thus threatened of what remained, and second of no recovery, reprisal or even respite from the present, dire circumstances.

It seems a perfect storm to expect folks to obey without reason, to submit whatever the sacrifice.