From DOUBLESPEAK to DOUBLETHINK

DOUBLETHINK is another Orwellian term that like DOUBLESPEAK, present contradictions 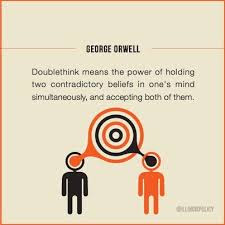 aimed to confuse the receiver and empower the source(s) of information.  From Wikipedia:

A process of indoctrination whereby the subject is expected to accept as true that which is clearly false or to simultaneously accept two mutually contradictory beliefs as correct, often in contravention to one's own memories or sense of reality.

Think about possibilities; when hear or see something (usually through media) and you sense that it may not be true, real or authentic, but you think it might be staged and scripted, while convincing and credible.

Can you think of specific examples, this DOUBLETHINK?

Somebody says or suggest that to have peace we must commit  conflict or, said another way, to have security (here), we must commit disruption, destruction and death elsewhere.

Can or will we each trade sensibility for acceptance, standards for so-called "New Norms", and other such compromises?   Sometimes for sure and often if we deem it necessary.

Is a lie really a lie or is more, well, an opinion or point-of-view?

Can the want for peace be gained by conflict and contention?

Can the want for security be gained by disruption, destruction and death?

Can for the want for more wealth, prosperity and power, be covered-over by the want for peace, security and freedom?

Can we each merely accept such contractions, failing to grapple with the consequences, the costs and the corruption around as well as within us?
Posted by H. Kirk Rainer at 2:54 PM